[This is part 1 of a sermon (delivered on in September 2010), that I put together for a local mosque.  Part 2 will be posted soon and it is about what the Quran teaches us on anger management, and conflict resolution] 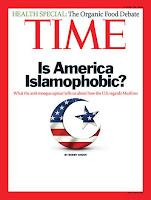 These are very turbulent times for American Muslims.  We are reminded daily how many fellow Americans hate us.  But we are also blessed to see many Americans that do not hate us, and moreover, they come to our rescue more efficiently and more visibly than we do ourselves.  We should be grateful to them and also to God for availing them to us in these tough times.  God has told us in His Book, about such people, non-Muslims, who are up-right people, that stand up for the truth as they see it, even if it means being against people closer to them than Muslim Americans are.

“They are not all alike:”.  God tells us (in Surat Al-Imran), “ among the People of the Book there are upright people, who recite God's messages by the night, and prostrate themselves [before Him].” They “… enjoin the doing of what is right and forbid the doing of what is wrong, and compete with one another in doing good works: and these are among the righteous.” (3:113-114)

Those good people upheld an important moral commandment: bearing witness to the truth, no matter in whose favor it is, or against whom it is. God repeatedly taught us that in the Quran:

O YOU who have attained to faith! Be ever steadfast in upholding equity, bearing witness to the truth for the sake of God, even though it be against your own selves or your parents and kinsfolk. ……Do not, then, follow your own desires, lest you swerve from justice: for if you distort [the truth], behold, God is indeed aware of all that you do!  (4:135)

And while we should thank God for extending help to us through those people, we need to learn from that example. In many instances, unfortunately, we fail to fulfill that glorious commandment. We should pray that we, as a community, mature enough and consult our religious conscience more often when we feel the wrong doings and injustices committed by fellow Muslims against non-Muslims or against other Muslims wherever that may be: either here, in Europe or in places Iraq, Afghanistan, Chechnya or other unlucky places in the world wherever some so-called Muslims commit atrocities against other Muslims or against non-combatants of any kind.

So, when you wake up on a Friday morning to find out that Friday worshipers in a Shi’a mosque have been slaughtered in our name, or that an Ahmadeya mosque in Pakistan or a church in Iraq, has been bombed, or that a school for children in Russia has been seized – all done in the name of freedom for Muslims - , please remember to bear witness to the truth only, the way God told us to.

Do not feel afraid or awkward criticizing and standing up against our own friends, next of kin or just wrong-doing Muslims anywhere in the world.  We owe it to God to bear witness to the truth in a way that pleases Him.