Mother’s Day and parents in Islam 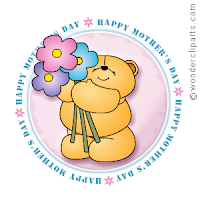 Sunday was mother’s day. It is a day that is as popular in Muslim countries as it is in the USA and the West. In Egypt it is celebrated on the first day of spring as proposed by the first person to advocate setting up a day for that occasion in the 1950s. I believe many of the Arab countries adopted the same date. The symbolism of associating Mother’s day with the dawn of spring should be obvious.I have to admit, that the pure and emotional celebration that I witnessed in my younger years has given in to the commercial enterprise that dominates every celebration known to mankind as time passes. For a nice review of the history of the event, and how its creator reacted to the ‘business’ aspect of it, read this article ‘Mother’s Day creator likely spinning in her grave‘ (from the Vancouver Sun).
Mothers, have the same kind of esteem in societies heart’s regardless of the dominant ideology. Islamic societies are no exception. In addition to the instinctive nature of our love for mothers, the Quran and the teachings of the Prophet Muhammad, peace be upon him, have abundance of commandments of reverence and dutifulness to the mother.
One of the Prophet’s companions narrated what he told the Prophet, “O Messenger of God, I desire to go on a (military) expedition and I have come to consult you.” He asked me if I had a mother, and when I replied that I had, he said, “Stay with her because Paradise lies beneath her feet.“‘

Another companions said “I asked the Messenger of God, to whom should I be dutiful?” He replied, “Your mother.” I asked again, “Then whom?” He replied, “Your mother.” I asked a third time, “Then whom?” He replied, “Your mother.” I asked, “Then to whom should I be dutiful?” He replied, “Your father”
Aisha, the wife of the Prophet, narrated: “I asked the Prophet who has the greatest right over a man” and - as the reader may have guessed - he said, “His mother.”
The Prophet once posed a question to a man: “Is either one of your parents still alive?”. The man said: “My mother”. He said: “God has instructed us in devotion to her, so if you do thus, you are as one who has made the Pilgrimage, visited the Holy Mosque and participated in jihad.”
While the mothers occupies a special status as evident from the examples above, respect and devotion is not restricted to one parent only as shown in these examples.
The Prophet said “Shall I tell you what the worst of wrong deed is?” People replied, “Yes”. He said, “Associating something else with God and disobeying parents.” He had been reclining, but then he said up and said, “And false witness.”
Placing disobedience to parents right in the middle between associating other deity with God and bearing false witnesses - two of the most major sins - goes to show the status of parents in Islam. This is not surprising of the Prophet since many Quranic verses have similarly highlighted the special status of parents:
For example, in the Quran 6:151, “Say: ‘Come, let me convey unto you what God has [really] forbidden to you: ‘Do not ascribe divinity, in any way, to aught beside Him; and [do not offend against but, rather,] do good unto your parents…“.
A similar verse enjoins the same kind of care for parents when they reach old age, understanding that aging comes with its own problems (17:23) “for thy Sustainer has ordained that you shall worship none but Him. And do good unto [thy] parents.’ Should one of them, or both, attain to old age in thy care, never say ‘Ugh’ to them or scold them, but [always] speak unto them with reverent speech“.
Many moral lessons in the Quran come in the form of narrations about the great men of God. John the Baptist, a revered figure in Islam, is mentioned, amongst many other great things, as being “… full of piety towards his parents” (19:15). The Quranic version of the miraculous speech of Jesus, peace be upon him, in the cradle includes a mention of kindness to his mother, the Virgin Mary. In 19:31, the Quran narrates on the tongue of baby Jesus “… and [God endowed me with] piety towards my mother; and He has not made me haughty or bereft of grace”.
But the obedience to parents has its limit (31:15) “[Revere thy parents;] yet should they endeavour to make thee ascribe divinity, side by side with Me, to something which thy mind cannot accept [as divine], obey them not. But [even then] …” the verse continues, “… bear them company in this world’s life with kindness, and follow the path of those who turn towards Me.”
So, despite serious moral and theological disagreements with your parents, reverence and kindness to them should never be compromised. Our bond with them supersedes any disagreements, material or spiritual.
There is no doubt in my mind that we are instinctively programmed to love our parents, no matter who they are or what they do. Over time, and hopefully before it is too late, many of us finally know why. For me, the love I had for my mother grew, and became most understandable to me, when I had my children. That was when I saw how my wife suddenly empty her world of everything except the children and their well being. I, like many fathers, was not a dissociated parent, but nothing I did could remotely compare to what she, the mother, did.
As my children get older, go to college and graduate, my appreciation for my parents keeps growing. It is unfortunately a bit too late for me to express that directly to them as they both passed away. But all is not necessarily lost.
Prophet Muhammad taught us that the ultimate act of reverence and respect for our parents can be performed even after their death:

“When a child of Adam (i.e., a human being) dies” he said, “their reward for good deeds come to an end except for three things [for which they continually get rewards]: useful knowledge [they taught] that keeps benefiting people, an ongoing charitable work, and God-knowing children that remember them in their prayers”.