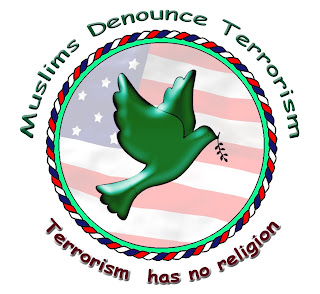 This is the logo I came up with while trying to describe what I want in a logo for a campaign that may encourage American Muslims to be actively more visible in the society. Most Americans do not realize there are a lot of Muslims around them, in all places, and all professions.

Many Americans think the only way for a Muslim to be, is the way they see on the news: angry, long bearded, dressed in traditional outfit of a far away culture, and is either praying or protesting in the streets, shouting 'Death to America'. Well, they are wrong. But we, Muslims, are not very helpful correcting this image either. Most of us do not make the effort to be visible; we either feel it is inappropriate to show our religious affiliation; feel scared of being 'too visible', or simply mind our own business, and we do not think it is any body's business to know who we are. While there are many occasions when any or all of these excuses are legitimate, there are more occasions when none of them is.

When few Muslims are visible as Muslims -most of whom are outstanding members of the American society- the more it is likely the quirky crazy ones showing on the TV news on daily basis become our public image. If the average American realizes they probably interact with, or even pass by 4-5 Muslims every day, it is less likely they will think that ALL of us are evil, violent or religious zealots.

They may not necessarily have to like very Muslim they meet, but that is a far cry from thinking that Muslims are, by default, inclined to violence and are hateful people. I hope the campaign I am dreaming of will gain momentum with time.

I am not a fool, and I know the chances of failure are much bigger than the chances of success but, as my friends got tired of hearing me say it, we do not have much choice.
If I do not do my best to make this place a more friendly place for my children, their children and any other American Muslim, I am not doing my job as a father, as a Muslim, or even as an American citizen.

The amount of emotional energy most Americans spend worrying about terrorism, sleeper cells, and home-grown fanatics is tremendous. I can only begin to imagine the toll it takes
on anyone when he or she feels that their neighbor, their work colleague or classmate is a potential terrorist, just because they believe in God in a different way. This is not a fun way to live.
As American citizens we owe it to our own people, the American people, to make every effort to ease their fears as much as we owe it to our fellow Muslims to help restore a neutral if not a bright friendly image to our religion and co-religionists.
Posted by Khaled at 11:54 PM